Why Mad Monkey Might be the Best Hostel in the World 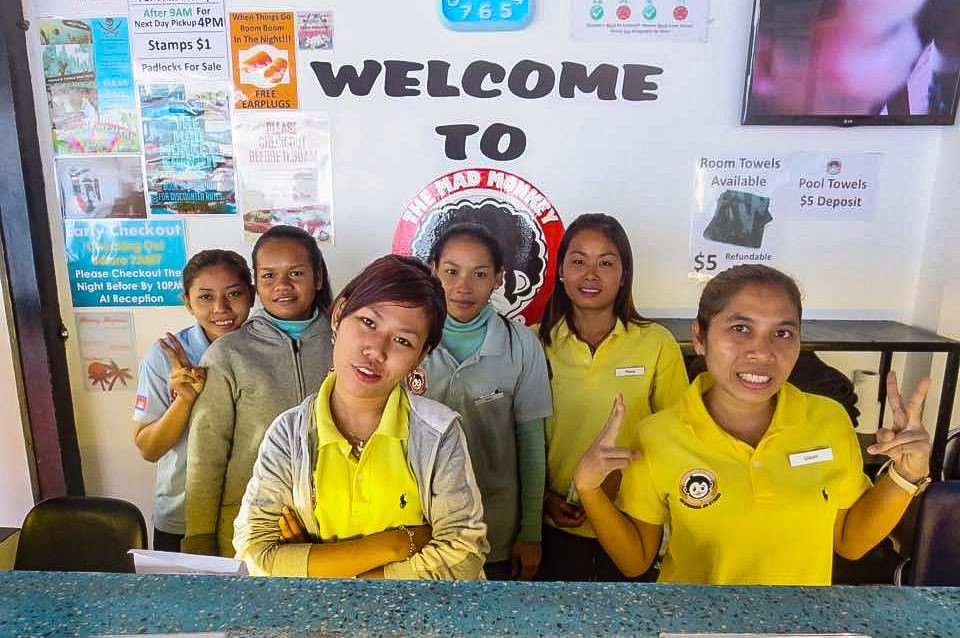 What makes the best hostel in Cambodia, and South East Asia, so great?

We have stayed in dozens of hostels and hotels as we traveled from Central America, throughout Europe, and into Asia. We occasionally come across establishments that truly impressed us. Usually that stems from how comfortable we were during our stay, how nice the rooms were, how cool the staff/owners turned out to be.

That said, we have never been blown away by a hostel’s business model…until we entered the Mad Monkey Hostel in Siem Reap, which proved to us that a business can be both socially conscientious AND profitable.

We were made aware of Mad Monkey by our friends over at Nomadasaurus, who insisted we visit the hostel while in Siem Reap. Upon arriving we met the staff and had a four hour long conversation with Steve, one of the primary owners, and were absolutely blown away by the insight and care he exhibited in regards to the social issues within Cambodia. We were thrilled to learn about all the various self sustainable methods of charity they employ, to learn how they treat their Cambodian staff, and to discuss all the efforts they have made to improve the lives of locals around them.

Yes the Mad Monkey Hostel in Siem Reap is a great place to stay if you want to meet people. Yes, their staff is rad, they have a cool pool, and a great rooftop restaurant. Yes, the atmosphere is chill, laid back, warm, and welcoming. And indeed, you can stay here for a week, and have yourself a roaring good time with like minded individuals. Hell, you might be having such a blast that you forget to go visit Angkor Wat until your last hungover day in town.

But it’s not until you hear Steve talk about how much the hostel cares about its Cambodian staff, or until you realize that the guys here raised enough money to buy and install over 250 water wells for impoverished rice farmers way out in the sticks, does Mad Monkey’s true worth become clearly illuminated.

Let’s start with the staff. Mad Monkey provides all of their local staff with private healthcare (a rarity in Cambodia), a basic language and literacy education (and an education stipend for those who want to study more than just reading, writing, and English), three square meals per day, maternity leave, and most importantly, respect and prospect of an educated future.

“In a way our staff are our clients” Steve says, and you hear the humble sincerity in his voice.

Neither Steve, nor the other owners, see themselves as saviors or visionaries. They haven’t come to Cambodia with bleeding hearts and plans to save the world, they are here because they love the country. And it shines through in everything that they do. The staff turnover rate at Mad Monkey? Virtually zero. Some staff members have left and moved on to bigger things, but none leave Mad Monkey worse off than when they came.

Then there is the social outreach.

The guys behind Mad Monkey are acutely socially aware, and very keen on making a positive impact within the communities they operate and live in. However, they prefer a planned and measured approach to tackling larger socioeconomic issues instead of just throwing money at any given problem to any random NGO (which Cambodia is full of).

Before we arrived in Siem Reap we knew Mad Monkey was helping fund and build water wells in rural provinces. What we were not aware of was the ripple effect caused by a lack of clean water. The chain reaction can go a bit like this: families living without clean water spend a lot of time and energy acquiring said clean water. That means trekking kilometers a day hauling good water back home, spending money on bottled drinking water (an expenditure that is nearly impossible as the average rice farmer makes under $2 USD per day), or drinking water from sources close to home, usually to disastrous effect. Child drinks contaminated rice paddy run off water, gets sick. Parents take child to a provincial hospital that they can barely afford to pay for, child gets treated, returns home and eventually gets sick again from the same tainted water. Parents, having no money at all for more hospital visits, go into debt caring for the kid. A micro-finance institution comes along, offers a loan at ridiculous interests rates, parents accept. Within months their 20 dollar loan has ballooned to a hundred dollars, which the family has no means of repaying. So they take out another loan to cover the original, and another, and eventually find themselves in hopeless debt. Parents lose their land, ending up in abject homeless poverty. They find themselves forced to move to cities and live on the streets, selling scams to tourists, or become involved with crime and prostitution.

That’s one ripple effect caused by a lack of accessible clean water. And there are many more. Hauling water usually means that the entire family has to pitch in. Kids might end up spending more time a week fetching water than they do going to school, or simply being kids. Lack of education lends itself to the insidiously cyclical nature of poverty. Rinse, repeat.

After identifying the lack of clean and fresh water as a root cause of many hardships Mad Monkey teamed up with the Cambodian Buddhism Association for Vulnerable Children (CBAVC), an organization founded and directed by the Buddhist monk San Van, to build water wells in rural farming enclaves.

To date Mad Monkey and the CBAVC have raised enough money to build and install 250 fresh water wells. They have big plans, and hope to raise enough money for 250 more such wells.

We spent a day with San Van visiting water wells in the outer provinces of Siem Reap.

This is not the only cause Mad Monkey has sunk its time and efforts into. When Sala Monkey School in Kep Cambodia found itself in desperate need of funds the guys at Mad Monkey put their heads together to come up with a tangible self sustaining solution. Kicking around ideas, ones that would not require constant funding, they were hit by a stroke of brilliance. A tuk-tuk taco stand! During the day the tuk-tuk transports the impoverished kids to and from school, and by night it transforms into a roving Taco stand, with all proceeds raised going directly back into the school. With the help of HostelWorld.com who generously donated $2,800 to the cause, and a successful IndieGoGo campaign, Mad Monkey raised the funds needed to get the project going.

Don’t mistake Mad Monkey for a charity or a NGO, however. These guys are running a profitable business. They are the largest hostels chain in Cambodia, and they are expanding. All this goes to show that you CAN be both profitable AND socially conscientious. In fact the more profitable Mad Monkey becomes the more they can do to better their surroundings, which ultimately leads to even more profit when travelers become aware that the hostel they are staying in is not only AWESOME, but also IMPACTFUL. Word spreads, and socially aware travelers come flocking. This is a very powerful message in our age of profit margins, corporate greed, narrow vision, and cynicism.

Don’t take our word for it, watch the below short video that outlines why and how Mad Monkey helps their local community while running a profitable business.

All of this is basically a very long winded way of saying that if you find yourself in Cambodia seek out the nearest Mad Monkey Hostel. It’s the best hostel in Cambodia, without a doubt. You’ll have a blast and you will indirectly be contributing to the betterment of the country you are having a great time in. Or walk up to any of the owners and managers and ask how you can become directly involved with lending a helping hand, or donating to any of their numerous causes. You won’t get fed any bullshit, and you will walk away from the conversation, and the hostel, illuminated.

Superman Sprains His Wrist: A Tale of the Innocent and Irresponsible

A Hoi An Homestay Steeped in History 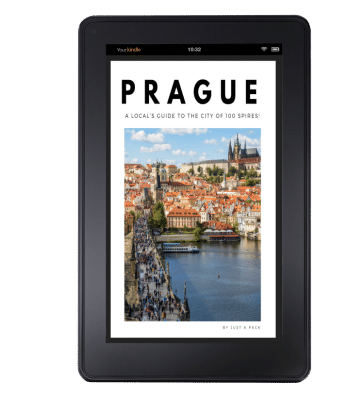 The Thailand to Cambodia Border Crossing is filled with scams. Here’s how to avoid and the best way to cross the border pain free! ... 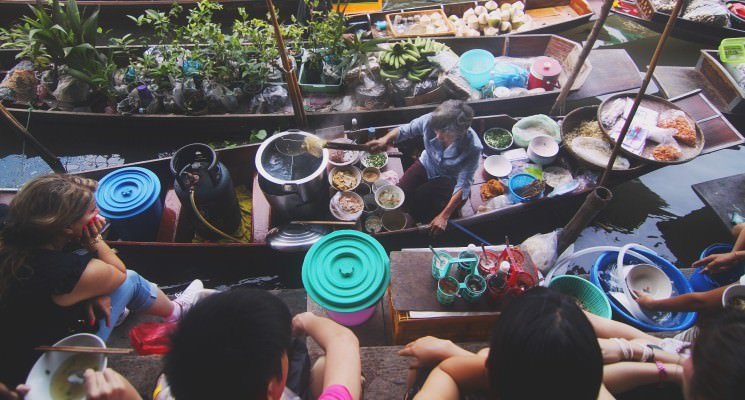 Food poisoning in Thailand is a very common occurrence for travelers. Food poisoning. Are there two words more dreaded by any traveler? P... 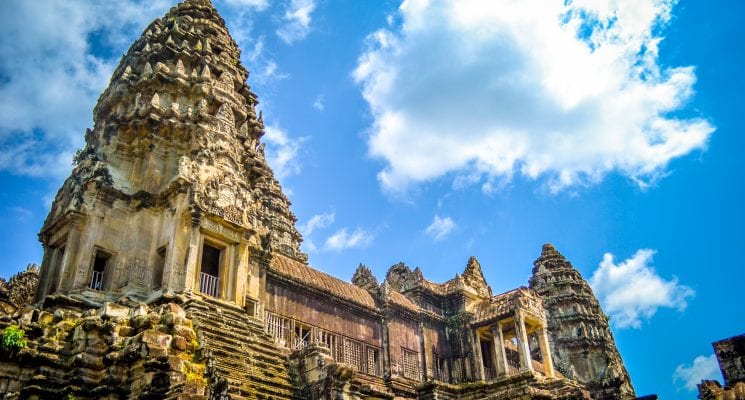 Visiting Angkor Wat is a given, but what are the other awesome things to do in Siem Reap? Siem Reap is famous for its proximity to the An... 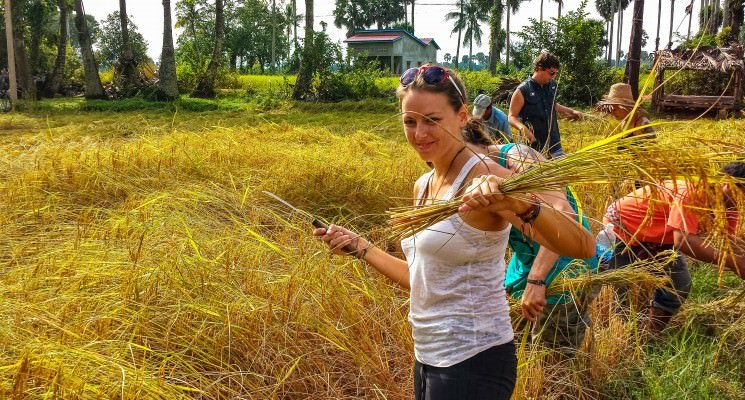 I grab ten golden stalks of rice in my left hand and bunch them together. The serrated sickle in my right hand saws through the stems clu...