Superman Sprains His Wrist: A Tale of the Innocent and Irresponsible

A few weeks ago, after a particularly interesting night in Thailand, I received the following e-mail.

This is Sue* the girl you helped a lot last night in Pai. my friend Bob* now is transferring to Chiangmai lam hospital to have an operation. he got two parts of bone break of his left leg. i haven’t deal with the motorcycle problem yet by now. how is your wrist now ? i’m really sorry that you got hurt your wrist. sorry…

You appeared like a super man to me last night! you followed my friend to the hospital after the accident, you found me, you helped me to push my motorcycle for 3 km, you took me to the hospital and also took me back to the hotel. you did so much! like i said you are the best american i ever known. you are so helpful and nice! thanks for everything you did for me.thank you Michael !-

*(names have been changed to protect the innocent and the irresponsible.)

Unlike Sue, I don’t think I am a caped hero for the events described above. I am far, far, from being Superman, Martin Luther King Jr., or even, say, Kirk Cameron.

All I am is a guy who was riding his scooter in the rain, after midnight, on a dark stretch of road leading out of a small town in northern Thailand, against all common sense and better judgement. I saw an opportunity to help an injured stranger, which in turn morphed into an opportunity to help a different stranger, and I took it. I was not looking for a reward, karmic or otherwise.

The concept of karma, in general, strikes me as wildly optimistic, actually.

I like to think of it as common decency. The least I could do. The least anyone can do. Decency begets decency, and such. And frankly…it was exciting. I never for a second considered I might be the target of some elaborate bit of highway banditry (some might consider an oversight on my part.)

Local Pai residents (Pais?) are generally very friendly, quick to smile, quick to help. In fact, on the night I came across the scene of the accident some 10 kilometers outside of town, the injured stranger (let’s call him German Bob) was already being carried by three local men into the back of white pick-up truck which was halted on the side of the dark road. I hopped off my bike and asked the groaning (and bloody) German if he wanted me to go to the hospital with him. In a bit of delirious clarity German Bob latched on to my voice, a familiar English amid a sea of Thai, and said that he did in fact desire that. I gave his crashed scooter a once-over, hopped back on my bike, and followed the white pick-up truck all the way back to town.

Once at the hospital, a squat single story structure manned by a crew of five hard souls, it became obvious that Bob was not in mortal danger. A broken leg, and in need of a couple of dozen stitches here and there. German Bob had avoided serious injury. Barely.

We got to talking a little bit; him through gritted teeth, rolling eyeballs, and in-between moans as a young doctor began patching him up. Turns out the crashed scooter Bob had been riding was not his. He borrowed it from a girl he met that same night. He had been speeding back into town from her hotel after a night of drinking… for a lighter.

Smoking really IS bad for your health.

The hotel was located some ways out of town, in the direction I had been aimlessly riding prior, and Bob didn’t recall its name. He was pretty certain the sign in the driveway had two lemons painted on it. Bob produced a key from his jeans pocket, room 202.

The girl was waiting for him to return, with both the scooter, and a lighter. A bit of detective work at 1:00 AM sounded like fun so I took the key from his hand and promised I’d find her, inform her of the situation, and bring her to his side.

I drove along one of the four roads that lead outside of Pai, back to the scene of the accident. The crashed bike was still crashed against a concrete pole, along with a goodly amount of Bob’s blood congealing into the pavement.

I proceeded further down the road into the mysterious night, the single beam of my scooter’s headlamp keeping the darkness at bay, looking for two lemons. German Bob’s memory proved relatively intact, and I came across a fruit infused sign some time later. Not lemons, but passion fruit actually. Hardly matters, however.

Pulling into the parking lot I mentally prepared myself to knock on a stranger’s door to deliver bad news. At 2:00 AM.

This was going to go great.

Room 202 was not difficult to find. I took a few deeps breaths and knocked on the door. It was quickly opened by a short Asian girl, who stood before me in the doorway wearing an equally short nightgown.

“I’m sorry to alarm you but your friend was in an accident. He is in the hospital now. Your bike is on the side of the road a few kilometers from here.”, I blurted out while trying to make what I considered to be cross-cultural calming motions with my hands. Her face went from confusion, to alarm, to suspicion, to confusion in a span of a few moments so I stammered on for a bit explaining how I came to have her room key in my hand.

It took Sue some time to accept this news, but my calming hand motions convinced her.

We stopped by the hotel owner’s bungalow to have her (much to her confusion) take some pictures of me in case I was a deranged lunatic looking to kidnap some young girls and drag them back to my den of unspeakable horrors. The sleepy landlady snapped a couple of pics with her phone, while eyeing us with an equal measure of pity and suspicion.

That out of the way, I drove Sue back out into the darkness. We stopped at the crashed rental scooter first. Of course, the keys were no longer in the ignition. There was a shirtless and mostly toothless old Thai man standing nearby in the dark, looking at the bike (and us) with obvious consternation. We attempted to communicate with him, but to no avail.

The bike appeared to be in better shape than Bob was, just some dents and minor scratches on the body. Miraculously, really.

Sue and I decided that leaving the scooter there would probably result in a missing scooter, but we lacked the key to turn the damned thing on. Feeling like a champion, I volunteered to push it, Sue driving mine alongside. And push the heavy scooter I did, some three kilometers back to her hotel, serenaded by crickets the entire way.

Sweaty task completed we set off back to the hospital. Bob was medicated and sleeping when we got there but woke up for a brief drugged up chat. He was in a room with five elderly female patients who were not overly enthused about our late night visit, so we kept it short.

Sue and Bob reunited, anticlimactically, I must say. Sue told Bob she’d visit him in the morning, asked him if he had the key to the scooter (he did not), and off we went. We drove all the way back to her hotel, where I dropped her off at 3:30 in the morning.

In an act of stupidity I sprained my wrist parking my scooter at her hotel. Apparently scooters do no like standing sideways on steep hills, kickstand or no kickstand. I grabbed for it as it began toppling, and wrenched my wrist in the process. Sue offered to nurse my new injury but I begged off. Wishing Sue an uneventful remainder of the night I braced myself against rain that began falling, and drove back to my hotel. Stumbling into my room half a hour later I fell into bed, wet and exhausted, but content.

I never saw or heard from Bob again after that night. Sue, on the other hand, sent me about 18 emails in gratitude, bought my travel partner and myself dinner and drinks the next night, and was pretty much consumed with expressing her thanks for a few days.

We still keep in touch, and she still refers to me as “her superman” in her messages. I haven’t had the heart to tell Sue that I think Superman is a bit of a dick. I prefer Batman, but if she keeps it up I will start wearing really tight spandex pants as my ego soars up, up, and away.

This story was originally published on Rebekah Voss’ excellent site The Happy Passport. 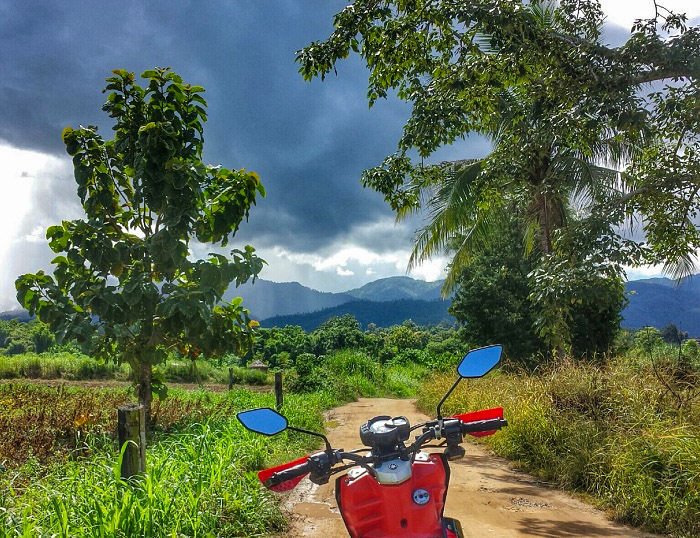 An American Expat in Greece

Why Mad Monkey Might be the Best Hostel in the World

Things to Do in Beautiful Pai, Thailand You don’t have to look far to find a ton of cool things to do in Pai, Thailand. Pai is loca...
Have you ever sat on a bus, a boat, a train, or an airplane and read a book? You probably have, as reading and travel have gone hand in h...
Namaste (pronounced nuhm-uh-stey) is a conventional, and respectful, Hindu expression on meeting or parting. While hiking the Annapu...
One of the most common misconceptions about travel is that it has to be expensive. Many people, when told of our plans to leave New York ...

We use cookies to ensure that we give you the best possible user experience on Just a Pack. If you continue to use this site we will assume that you are happy with it. We do not use your personal data, and will never sell it.OkNoRead more